In the Doomsday Book of 1086, BURG as this place was known, belonged to Richard Wallis. This family held the estate for many generations, subsequently the name BURG(H)WALLIS originated.

Burghwallis Manor is believed to have been situated in the Park, where now only remains a square pond, though traces of this building are still visible. This manor was probably moated, as was usually the case for defensive purposes during such times up to about the end of the Wars of the Roses (1485). About the time of Henry VII, the position of the house was moved to the present site on a hill. A larger portion of the original village was built near the church, but several cottages were demolished in the 19th Century.

Burghwallis Hall has roof timbers of Tudor origin, in the central and original part of the building, though the south-west wing was, according to Edward Miller’s “History of Doncaster” (1804) built by George Anne around 1797. It was a typical 18th century house with 5 bays and a centre three-bay roof pediment. All was externally stuccoed.

About 1820, Michael Anne also altered the exterior to give the house a medieval effect. All the stucco was removed, revealing the rough and rugged stone beneath. The centre pediment was then removed, and another storey added along with 5 gables. 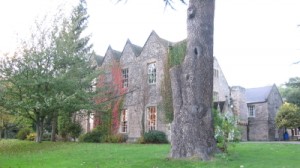 Although the house lacks symmetry it is a picturesque building “protected” by a massive Cedar of Lebanon. Being situated on a hill, it has an extensive view of open fields, former park and woodland. The front, which faces in this direction has the 5 gables which add character to this style of house which one would, perhaps, normally associate with some classical novel, of an old stone rambling manor standing high upon the moors.

Michael Tasburgh-Anne built the front staircase and the south west chapel wing (1797). As a result of this, the original chapel, which was in the attic, was destroyed. During the 18th and 19th centuries, a priest came regularly from Pontefract and Doncaster to perform services.

A priests’ hiding-hole was “secretly” accessible from this chapel, and was only discovered by Crathorne Anne in 1908. Michael Tasburgh-Anne moved the main road from the park to the present position in about 1840.

From 1888 the chapel was closed at Burghwallis, as the Hall was let to Protestants. Much of the altar furnishings were sent, at that time, to Blenkinsop Castle, Northumberland. In 1907, the Anne family returned to Burghwallis.

The Anne family were long established in the area, originally with their seat at Frickley,  but subsequently at Burghwallis Hall until this was sold to a religious order in 1942. The prosperity of the family declined from at least the 18th century, probably hastened by the civil penalties attached to their continued adherence to Roman Catholicism. The estate, and the surname in the absence of direct male heirs, passed to the Charlton family of Northumberland in the late 19th century. Most of the records of the family are held by the Yorkshire archaeological society and described in Sylvia Thomas, ‘Guide to the archive collections of the Yorkshire archaeological society’ 1931-1983  (1985) pages 42 to 43

The house was later acquired (1946) by the Sisters of Charity of Our Lady of Good and Perpetual Succour, who took it over as a Rest Home for elderly ladies.

In 1986 it was sold to the Dominican Sisters of Oakford, a South African Foundation who had extensive alterations done, including building a new Chapel and a retreat room. It continues to be a Rest Home for elderly ladies and a Chapel of Ease for Blessed English Martyrs parish as well as Convent Chapel and Rest Home Chapel, with daily Mass. Many parishioners take part in the fund raising activities and participate in the religious life and spirit of the place. They like to visit it as a place of retreat and quiet and to find something of the beauty.

The mansion is now known as St. Anne’s Rest Home. The Sisters are truly worthy successors of the martyrs and confessors who lived there many centuries ago and the Spirit of the Anne martyrs and the hospitality of the place and its people live on.

Burghwallis Hall aka St Anne’s Convent is reputed to have a ghost.  On 14 March 1934 a mother smothered her son while he slept, then concealed his body in a closet.  Her husband discovered the body then murdered his wife and took his own life.  A music box is reputed to have been heard through the corridors along with the voice of a small boy.  The ghost of the man in grey and a small woman are also claimed to be seen walking the corridors.