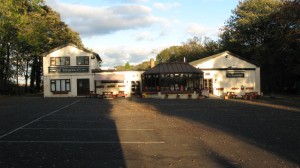 The Burghwallis public house is situated off Scorcher Hills Road on the Western side of the village.

The Burghwallis pub is under the new management of Sally Shenton.  The pub has now re-opened.    We wish Sally  all the best and look forward to the villagers  supporting the pub in the future.  Go and experience the new menu, you won’t be disappointed.

The following article is reproduced with the kind permission of Margaret Burns  at www.burghwallis.com

The History of the Burghwallis Village Club and Institute

After the ‘Great War’ another application was made on 20th of December 1919 for ‘temporary’ club premises; this was by “Burghwallis Working Men’s Club” as the owners with Sidney Ellis as the architect. This was at first rejected, but a re-application on the 17th of January 1920 received approval and an ex army ‘tin hut’ was acquired and erected on the site at the junction of Grange Lane and Scorcher Hills Lane, opening as ‘Burghwallis Village Club’. An application for an ‘addition’ was put in almost immediately on the 14th of February 1920, presumably to build on a beer cellar.

The land was leased from the Burghwallis estate, being the property of Major Anne; from 1931 to 1939 the rental was £8 per year. Electricity was supplied from the Burghwallis electricity department, the meter rent being one shilling per month and the electricity 6p per unit. The billiard table came from Burghwallis Hall as a gift. The club ran successfully for years with many members coming from the mining communities at Skellow and Carcroft, access was just a short walk via the Bridal Path.

Annual events included a sports day held on the field behind the club and cross country running races around the country lanes. Every summer the club run an outing to the coast for members and their families for which a small subscription was paid weekly. I remember the numerous buses lined up on Poplar Road at Skellow, nearly filling the street from top to bottom. Seaside venues alternating from year to year, every other year seemed to be Cleethorpes, very popular with a large beach, the amusement park at the north end and numerous fish and chip shops and pubs. It was popular as it was also the shortest journey. In alternate years visits were made to Bridlington and Scarborough, although the journey back took longer so time at the coast was shorter. A stop at a ‘watering hole’ was made on the journey there, with long queues forming for refreshments and ablutions.

On the way back thirst was slaked on the coach; at that time alcohol was allowed on the buses so bottled beers and soft drinks for the children were carried and distributed during the during journey home.

In 1942 the Burghwallis estate was to be sold off in lots. At a special meeting of the club trustees on October 12 it was decided to consult an estate agent with a view to purchasing the plot of land on which the club building stood. At a sale at the Danum Hotel on the 15th of October 1942 the plots of land, (number 46 on the plan,) of approximately 3 acres, 2 roods and 2 perches, was bought for £200, leasehold. This included the site of the club building, with an adjacent field and an area of wood. The ground rent was to be sold separately, the sum of £300 being asked. At a further sale on the 19th of June 1943 at the Woolpack Hotel the freehold of the site was eventually purchased for £150

The Club committee proceeded to improve the building, renewing the roof with corrugated asbestos sheeting, building on the porch to the bar entrance, and installing central heating. In 1951 the committee decided to provide a house for the steward. Building began in 1953 on land at the edge of the wood on Scorcher Hills Lane, being the front corner of the clubs sports field. Previously to this the steward had to travel from Robin Hood’s Well.

Having the steward’s house close by improved the security for the club, which had suffered from many break-ins in the past. In 1954 the possibility of a building building a new (brick) club was discussed, but apparently funding for this could not be obtained and instead urgent renovations were made to the nearly 40-year-old hut.

Funding for building the new clubhouse was achieved by selling land that the tin hut had stood on as a building plot, and eventually the steward’s house.

The new building was popular and the club flourished, with the games room busy most nights, a weekly quiz in the snug, and Saturday dancing and Sunday entertainment filling the concert room. However by the late 1980s membership was falling and the club began to get into debt. Various attempts were made to keep it going, but eventually it had to close.

In 1995 the premises were bought by Mr and Mrs J Simm previously of the ‘Anne Arms’ at Sutton. They ran the building as a public house, ‘The Burghwallis’, with meals been served at lunchtime  and evenings. They made extensive alterations to the property but managed to keep the games room open throughout for the benefit of regular customers. The concert room was refurbished, kitchen modernised, and the snug and entrance hall opened up and extended into a large dining room with the addition of a sun lounge.

Following the death of Mr. Simm his wife carried on for about three years, but when an offer to buy was received from the Pub People she decided to accept this and retire. It was then run for several years with changing managers and fortunes and eventually sold to a holding company, being leaseback to the Pub People on various short-term leases. A Mid-term lease is now held by the new landlady who is working to rebuild the clientele.