Home / Blog / Calm After the Storm

Anyone taking a sneaky peak through the curtains last Saturday evening would think Armageddon had arrived. At 5pm there was a tremendous downpour with gusty winds to boot. Great timing for the lighting of the Christmas tree.

A lot of hard work had already been put in by the team who pointed a Christmas tree in the direction of up in the war memorial, then decorated it from head to toe. The lights were duly placed and the all important test completed. The “It will be alright on the night”angel was duly summonsed; a lady angel no less as men angels can be a bit haphazard.

Thus at 6:30pm on Friday evening the rain stopped and the strong winds failed. It was as if somebody had remembered the Burghwallis ceremony and switched the weather off. The 20 brave souls who ventured into the dark night found it to be dry and quite mild, OK maybe stretched that last point.

The Parish council team who spent most of the afternoon sorting things and erecting the gazebo popped back at 6pm to reerrect the then flattened gazebo and check everything had survived the onslaught. All was well, most importantly the mince pies and the mulled wine had emerged unscathed.

The gathering sang most of the words of the carols – and out loud as well. OK a few more people would have increased the volume and enticed more to sing for the heck of it. Father Chris took the service whilst Father Richard was in dry dock (hospital) for repairs (operation). The tree lights were duly switched on and the serious work began of munching  mince pies and drinking the always welcome hot mulled wine.

A visitor remarked they always admire the community spirit of Burghwallis. Singing carols after a storm was seen as just an everyday event in their view of Burghwallis.

A heartfelt thanks for the behind the scenes team of volunteers. In addition to the Christmas tree angel there were quite a few mortals. The guys who erected and dressed the tree, the team that supplied mince pies and mulled wine, Howard who played the organ, Father Chris who wore his “dog collar” and a flat cap and for Carol Spiller whose electric supply is lighting the tree for the duration… Yes of course she knows. 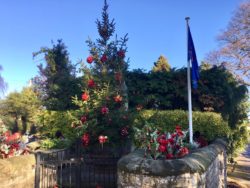