Those with splendid hearing would have been serenaded by the the church bells of St Helen’s at 7:00pm on Armistice day.

Along with thousands of other bells throughout the UK the bells of St Helen’s rang out in tribute to the ending of the 1914 – 1918 war. But our bells were a little different on the night. St Helen’s is blessed with three bells recast in 1895 at a foundry in Loughborough. You probably already knew that bells are the largest and loudest instrument in the world and the conventional way they are hung makes the English-style change ringing  unique.   Why is this I hear you say , well the “English” bells are mounted on a wheel with all manner of pivots, beams, stays and gudgeons. Uniquely this allows the bell to stop rotating at the top, allowing the bell ringer to control precisely when the bell tips over so ring in a controlled  ‘sequence’ no less. If the stay were not there the bell would rotate past the top dead centre and pull the ringing rope up at a rate of knots. Hence the scenes of the monk disappearing up into the bell tower. 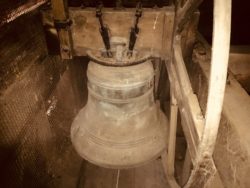 Learning the sequence of bell ringing originated the term “learning the ropes”.

St Helen’s three bells are hung in the belfry with a ringing chamber just below. This is where the ropes hang to be pulled in sequence by the bell ringing team. Over the years the bell wheels have become a tad detached from life as we know it. Bits have dropped off. Functionality has deteriorated, I know the feeling. Our bells therefore needed modifying so that the bell hangs vertically and stationary; ‘hung dead’, and the clapper is now swung on its own moved on a rope to strike the inside of the bell. This technique is known as ‘clocking.’ There are questions at the end of this! 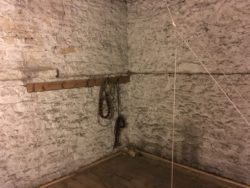 Because the ringing process is much simpler  the clapper ropes can now reach down to the ground level and the ringing room is no longer required. St Helen’s bell ropes are now mounted on the wall inside the toilet, and why not! It requires a bit of determination if someone is using the toilet  but it can lead to all manner of interesting conversations with the bell ringer. 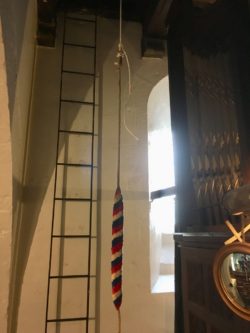 Back to the bell ringing chamber. As it was not in general use some squatters moved in. Pigeons. They left the place in heck of a mess that only the Rentokil guys could deal with. Pigeon droppings are right up there with asbestos in the nasty league. They came, they cleared and they left but accidentally knocked one of the bell ropes off its pulley. Come the big night on the 11th November, Colin the churchwarden manned his bell ringing post to ring out the Armistice signal. Ringing three bells that have been ‘clocked’ – you remembered – is a little limiting with regards the musical range.  Having one of the trio jammed left Colin’s scope tragically impeded. A bit like the two note Samba, Ding-Dong or Dong-Ding or even in a rash moment Ding-Ding-Dong was about the sum total of the musical range available.

The official remit from them who organise such things in London was for four minutes of bell ringing.  Undaunted  Colin did his bit right up to the last ding, or was it a dong?