Way back in December 2016, the Parish Council decided to replace the village notice board, which was showing signs of serious distress. A new board duly ordered in March this year was ready for installation in May, or so we thought.

As the old BT telephone box was removed at about the same time it was agreed that this would be the ideal location for the new board. That is when the “fun” started. The board could not be installed exactly where the phone box stood, because there was a residual concrete base plinth, so the contractors decided to install it close by. However, they encountered live electric cables underground.

Fortunately no-one was injured on that occasion – or the two further attempts that were made at the installation. BT’s subcontractor and the DMBC checked out the situation after each incident and made the location “safe.” At that stage the contractor opted out of any further work on the site! After much brain-storming and negotiation it was decided to commission DMBC Highways engineers to instal the board, so that there could be no further complications. The installation was duly completed on 15th November almost 12 months since the idea was first mooted – a long process, but, hopefully, one which will see the new notice board have a long and productive life! 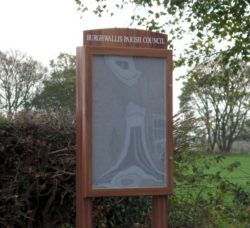 The notice board is there for the benefit of our residents. If anyone has anything of general public interest  they would like to see displayed on the board, please contact one of the parish councillors, whose names and contact details are displayed – where else but on the new notice board.