Visitors always admire the welcome signs at the entrance to the village with their eye catching crest. This is the family crest of the Anne family, long associated with the village. The family once owned Burghwallis Hall and owned a sizable portion of the land in and around the village. Tragedy struck the family when the last remaining son, Robert Anne, was killed in World War II. This left the Anne family without a male heir and resulted in a decision to sell most of the estate in the 1960’s. 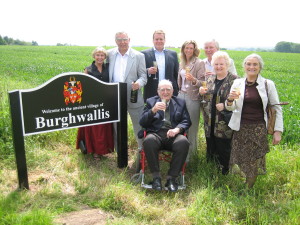 The family crest slipped into obscurity only to be resurrected after some detective work by our then parish council deputy chairman Sarah Woodward, in 2006. This revealed the monochrome design  and thanks to Bernard Juby, a member of the British Heraldic Society, the crest was renovated to  its full coloured glory. Further investigation revealed the existence of Elizabeth Ellis-Anne the sister of the late heir to the Anne estate and the sole survivor of the family. With her blessing the crest was adopted by the village and used on the unique welcome signs to the village.

The new signs were erected in 2006 and launched at a ceremony attended by Elizabeth Ellis-Anne, seen in the picture below. A news article from the Doncaster Free press summarised the event. 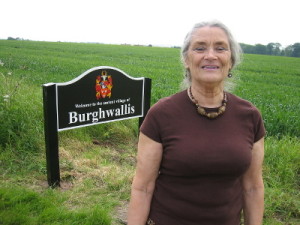