Despite the storm “Desmond” doing it’s damnest 50 souls braved the wild and windy weather on the 5th December to sing carols, drink mulled wine, eat mince pies and watch the Christmas tree lights being switched on at the War Memorial.

The now annual event drew the old and young to join in to celebrate the start of the festivities. Despite an attempt to being blown away by the the ravages of Desmond it proved ecclesiastical training in voice projection coupled to that of a clearly frustrated town cryer allowed the Rev. Richard Walton to make his voice heard over the tempest. Richard, or rather David won hands down against the Goliath Desmond.

The carols were sung to the accompaniment of Pat Stanley on the organ and interspersed with a run down of events to Christmas by Father Richard that would have any TV ad voice-over man checking his C.V. Pat took pity on those failing to hit top C and dropped a few octaves to the significant relief of many who were relying heavily on the wind to mask inadequacies.

The event was organised by the parish council who proved that with a little planning a “wild” event of the entirely legal kind can be held in Burghwallis.  The tree and the decorations were rooted to the spot thanks to the dedicated decoration team that have perfected the ideal knot. 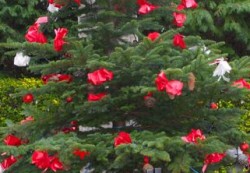 Thanks were extended to all who helped spread the Christmas cheer and to Mike and Carol Spiller who donated the power for the tree lights for the duration of Christmas.