Once again our village flag is flying at half mast. This occasion marks the passing of Mr Edward Bell, who died on 6th July 2017 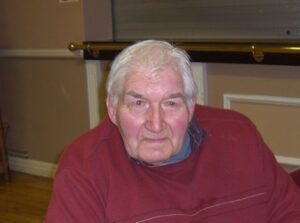 Ted lived in Burghwallis for many years and was an active parish councillor for over 10 years, retiring due to ill health just two years ago. Ted’s later contributions, when he toured the village in a wheelchair being the signs to direct visitors to the pinfold and village pump. He was also a key player in erecting the plaque to commemorate the original position of the plague well along Abbe’s Walk.

Ted took a keen interest in the development of the Neighbourhood Plan, attending all the public meetings.

Many will remember Ted for his business acumen in the specialty second car market where he was an eminent ‘wheeler dealer’. He also bred British Bulldogs, which possibility was the ideal breed to represent his personality. He was also a keen wine buff; a feature that was often shared with his many visitors. Above all Ted will be remembered as one of the characters of the village that enriched us all, and will be sadly missed.

Ted’s funeral will take place on the 20th July at 14:20 pm at Pontefract Crematorium.

One Week To The Fun Day
Fly Tipping Bogan Gets Jail Sentence.