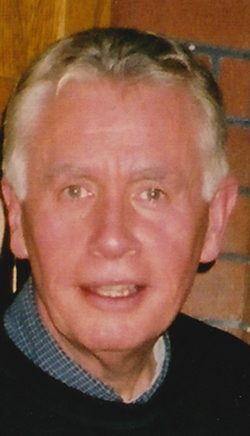 Mike was born in Woodlands where lived with his parents Clarice and Clifford and his late sister Margaret. He was quiet as a boy yet, as Carol, his wife told me, he would stand at the garden gate and ask neighbours for a biscuit – clearly the beginning of his life as an entrepreneur. Mike’s Welsh heritage has always been important to him remembering especially happy childhood holidays spent in Swansea with his favourite cousin Cynthia.

As a bright child he passed his 11+ to go to Percy Jackson Grammar school where he was well regarded by his peers and where he was rather sporty – although I’m told this may have been a ploy to attract the girls with his natural good looks and athletic physique. Sadly, Mike’s father died when he was 17 which was when Mike left school to join the family business; training as an engineer and working his way up from the bottom. He greatly valued the support of the older men who looked after him and who became his friends.

Mike and Carol met at a work’s Christmas function and clearly Mike was smitten by this ‘slightly’ older woman in that he asked her to marry him 3 times before Carol finally gave in and allowed him to become her ‘toy boy’. They were married at Elsecar on the 1st of June 1968. Their children Debi and Simon told me how while they were growing up it was clear that Mike’s priority was to ensure that he could always provide for them making Carol his first priority and growing the business. It is a tribute to Mike’s abilities as an entrepreneur and businessman that he was able to diversify the company setting up businesses in Brazil and Chile and trading around the world.

Once this phase of his life had achieved its level of success, Mike rather mellowed, becoming a loving grandfather. As Liam said he was just the best granddad. Liam told me how on a family holiday to Florida, Mike took him to Gatorland where he joined in the fun; first when Liam was asked where he came from and told everyone that it was Sprotborough! And then, when the keepers suggested he should take his shoes and socks off to help them select an alligator. Clearly, these are fond memories of times when Mike was at his happiest: surrounded by his family.

I was very impressed by the pride Mike’s family showed as they expressed the deep commitment Mike had for supporting charitable causes. He served on the board of DRI and had a significant involvement with the Children’s unit there. A measure of the altruistic and selfless way in which he approached his work for charity can be seen in his fund-raising work for the cancer detection trust and also for the hospice. He is a man of whom it can truly be said that he has left a lasting legacy that has touched the hearts and lives of many, many people.

Mike was not a man who took well to being ill. Indeed, he fought against cancer with courage even when he felt fear as it progressed. He would not let others know he was ill and his doctors were surprised how was able to carry on for so long. It is an enormous testimony to the love and care that Carol gave Mike that he was able to continue a normal life for so long – even at the cost of her own health. Although, he thought nobody knew how ill he was, clearly both Carol and Debbi have a professional insight which meant that they knew everything. At the end Mike died peacefully, surrounded by those whom he loved and who have loved him in return.

Mike was a man of private faith – in true Church of England fashion – whose family have been involved in this church; with Carol teaching Sunday School and Simon serving at Mass as a boat boy. With Carol he would love to visit churches here in the UK and abroad. It was place of meaning for him – as is this church and this place. The Christian promise is that death is not the end. In Jesus God became like us so that we might be like him. Jesus died as we die so that we may rise from death as he rose from death. In our prayers today Dee will say, “Remember for good this your servant Mike as we also remember him.” And there is much good to remember: Mike’s love and care for Carol and his family, his hard work that gave work to others, his devotion to charitable work that that has had such a wide impact upon the lives of so many.

Today I commend Mike’s soul to God’s eternal keeping. May he this day rest in peace and may he rise in glory. Amen