The old Pinfold down Well Lane in Burghwallis has slowly been renovated. The effort mostly coming from volunteers, who have cut grass, weeded and maneuvered lumps of stone to repair the structure. The latest event in this sequence has been the repair of the wellhead that sits at the top of the enclosure.

In order that the appearance of the well followed the overall theme the stone used seen in the photo was all “borrowed” from the surrounding area. If you are perhaps missing the lump of stone that secured the lid on your recycle bin, stopped your car rolling down the hill or sat in your garden with which you had long and meaningful conversations – we know nothing.

The well stone work, completed by noble local volunteer, Brian Bennett, finishes the overall repair of the Pinfold that links the village to its past. Although not the best example, it sat derelict for decades and suffered a degree of modification – few pinfolds can boast a sewer pipe running right through it, but it’s ours dammit! 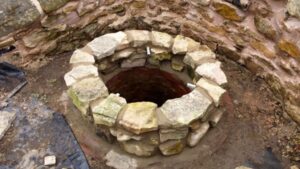 The well head is also fitted with a cover. This is not designed to be stood on but if the moment takes you and you fall through can you let us know how deep the well is.

The terms “pinfold” and “pound” are Saxon in origin. “Pundfald” and “pund” both mean an enclosure. There appears to be no difference between a pinfold and a village pound. The term pinfold seems to be more popular in the north and east of England whilst in the south and west the term pound is more popular presumably because of all the bankers who live there in the hope it will fill with lost coins and the odd note.

Examples of pinfolds range up and down the country some originating in Saxon times others from the 17th and 18th century. Pinfolds are inevitably a high walled and lockable structure and served several purposes; the most common use was to hold stray sheep, pigs and cattle until the owners, usually for the payment of a fine or levy, claimed them. The pound could be as small as 225 square feet or as big as half a acre and may be circular or square. Early pounds had just briar hedges but most were built in stone or brick making them more stock-proof. The size and shape of village pounds varies, some are four sided: rectangular, square and irregular, others are circular. Very few have their own sewage system!