And there we have it. The message clearly said a bunch of volunteers were going to rub up and down a 20 foot wooden pole. Burghwallis was about to replace the historic May pole dancing festival with a new outdoors pole dancing club – presumably inspired by the latest “Moneysupermarket” TV advert. The volunteers involved, apparently of mature status, meant Burghwallis was about to hit the headlines with a crazy keep-fit routine for the adventurous. O.M.G etc!

Photos were requested to provide evidence along with concerns over potential injuries and possible splinters in places even your best friends would not care to remove. Perhaps the inevitable gatherings of onlookers could inadvertently also provide the ideal traffic calming solution for the village? How long could the team maintain the dance routines and could they time them for peak travel conditions. Visions sprang to mind that have been, quite frankly, difficult to remove. Had the Parish council, secretly, gone quite mad?

Unfortunately the devil was indeed in the detail. The pole they were going to rub down was the flag pole at the war memorial, which rather mundanely, was about to be repainted. But at 20 feet it was quite a climb, were we about to see a Chinese acrobatic pyramid formed to reach the top, or involve a vertical stack of councillors on each others shoulders? But no, turns out the damn pole was hinged at the bottom, and thus careened to ground level where sandpaper, paint and a pure form of energy possessed by a tiny portion of the population who enjoy whacking paint about, cracked on to repaint the pole.

Volunteers are thin on the ground for some tasks in the village, but Dave Maxwell, Dave Hudson and Kath managed to convince young Callum Langley – aged 2 – to rock up with his paint brush and join in the proceedings. 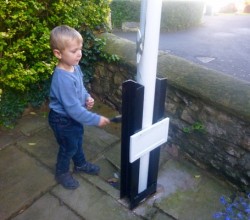