St Helen’s churchyard got a thorough sorting last Friday. Colin Bowes, the now retired churchwarden, previously managed the churchyard almost single handed over the years but had to hang up his sickle and scythe due to ill health. In his place there are contractors whom understandably, view the complexities of graveyard maintenance with a little trepidation.

A team of some 18 living souls thus stepped in to clear up the home of dozens of dead souls. Volunteers from the three kingdoms of Burghwallis, “Westeros” – the Western approaches from Skellow to the war memorial, “The Middle Kingdom” – Old Village Streeters, and “Abbeville” – east from the church gathered, fittingly, like a squad of Saxon fusiliers.

Armed with pitch fork, sickle and scythe ( actually a petrol strimmer ) they set about clearing ivy, weeds and grass around the gravestones and boundary walls. All those tricky bits that contractors love to clear – not. Humming refrains from “Poison Ivy”, in the style of David Cameron as he left Downing Street the team hacked, slashed, pulled, pushed and dug the undergrowth that, having claimed the interned had set about to obliterate the surface structures.

The work revealed two tombs. Hidden for years under a thick blanket of ivy they first appeared as two green mounds.

The gravestone of the Reverend Wyatt, vicar for 34 years until his death in 1836 blinked in the daylight for the first time in years. 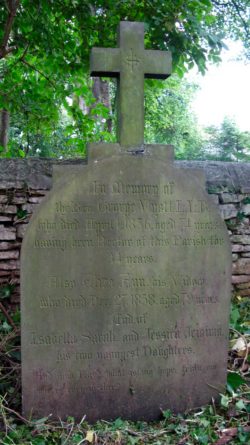 The listed monument of the tomb of Abbe Louis de Roux a catholic priest buried in a Anglian Churchyard and the Abbe whose gave the name to Abbe’s Walk was cleared to reveal a piece of intriguing history of the French Revolution and Royalty.

The stone walled southern boundary of the churchyard revealed its true glory. Weeds, grass and the odd detritus you might, or might not expect were uprooted and cleared allowing the cherished Saxon church of St Helen’s to stand once again in its full glory.

The clear-up team took around three hours to complete the task. Weary, creaking, what with knees and backs stiff the merry band departed leaving the proceeds in a heap that Colin, with a look in his eye twixt  pyromaniac and Guy Fawkes intends to burn as soon as it has dried out. If anyone wants a cost effective cremation and interment there’s a deal to be had – just a thought.

There are talks of making the clear-up an annual event. If you want to be included in this splendid event please contact Mrs Irene Trenbirth-Smith on 01302 330305.