Looking through the Burghwallis baptism register, 1813 to 1951, I came across some very descriptive entries made by the Rev George Wyatt (G.W.) who was Rector here from 1823 to 1826, and certainly carried out his duties with utmost efficiency.

The first of the entries for 27th January 1828 make me smile:

(Note) These children were born under a tent or awning fixed upon some wasteland on the West side of the North Road in the parish of Hampole (G.W.)

And 14 years later, on 21st first of April eighteen forty-two

(Note) This child was born under a tent in Skellbrooke Green Lane , on the West side of The Great North Road. I cannot therefore vouch for the legitimacy of the child. (G.W.)

Kate – adult age 18 years.    Parents unknown to herself and others. Calls herself  Jarrett and comes from Newport on the Isle of Wight. House-maid at the rectory and a young woman of excellent conduct and character.

His first baptism at Burghwallis was made on 24th  of August 1823, and his last was on 12th January 1856. In the 33 years as the incumbent, he performed 181 baptisms, including three sets of twins. I imagine he was quite a practical person as the following notes were also entered in the register.

Memorandum 3rd April 1843. The height of the church tower on the north side from the top of the battlements to the very ground is 76 feet, as measured by a tape by one of the men employed by the Ordinance  taking a survey.

1849 n.b. The Priest’s gate or small stone archway, leading into the churchyard was rebuilt by the Rector in 1848. The stome archway has since been replaced by a beautiful arch od white roses, variety “Rambling Rector”. 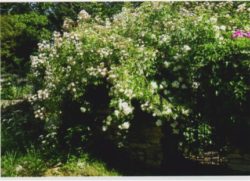 His successor, the Rev Francis William Peel, great-nephew of Sir Robert Peel who became Prime Minister in 1834 and 1841, will also been quite busy in the baptism register. He had 13 children, and extended the Rectory  to accommodate them and probably a few more housemaids as well to look after them.

If you have any information on the history of Burghwallis or amusing anecdote please contact us using the comment form below:-