Not for the feint hearted this sport involves using a lance to spear a two inch wide piece of wood on the ground using a lance. Sounds easy until you realise you are on a horse travelling at the full gallop, and just to make things interesting you also need to use a sword to collect rings handing from a ribbon, piece several shoulder high targets then draw a pistol to burst balloon targets. Only then do you get to have a cup of tea.

The sport traces back to the middle ages where it was used to train the military in horsemanship. Rider and horse must develop a very close relationship to achieve the coordination needed. Originally the sport was the domain of the military and police forces around the world it has now grown in popularity and attracting civilian recruits.

Paul and Tracy have competed in many national and international competitions. The cost of shipping the horses is offset by hiring local mounts in-country. Something  Hertz or Avis have yet to add to their hire range. The competition horses are pooled by the event organisers and the riders draw their mounts for the competition on a lottery basis – adding a further element of skill required of the rider to control a strange horse. 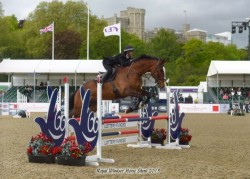 If you have any news on a resident of Burghwallis who has achieved an award, just moved into the village, or can recall some local history can you let us know.