Home / Blog / Things That Go Bump in the Night

Anyone travelling along Scorcher Hills Lane towards the Village, or  strangely taking the long way round to the A1 by going the other way* will have noticed a new crop of pot holes. During the recent bad weather we have grown a crop of new ones and the existing ones grew much bigger.

Freezing weather, passing vehicles, and a lack of repair means these little blighters can double in size in 24 hours. In the USA they are known, and maybe better described as chuck holes – as they chuck up stones over the road and can also chuck a car off the road.

I introduced myself to the latest batch the other night.  In trying to avoid a nasty blighter on the right I belly flopped into Quatermass’s pit  on the left. ‘Dash’ I thought as the car hit the pot hole the size of paddling pool (no honestly) with a sizeable thump.  The almost new nearside tyre burst and the wheel rim took a right uppercut. The need to change the wheel just added to the drama.

Scorcher Hills Lane has become a battle ground. Cutbacks in budgets have scaled down road repairs and pot holes are a current way of life – like some third world country. The remedy is a ways off. Road rebuilding hasn’t entered into any manifesto so at best we must rely on a shovel full of tarmac to partly repair a pot hole until it’s big enough lose a bus in it.

In case you ask my pot hole currently measures 2 feet in diameter and 4 inches deep. And no I didn’t see it and was only travelling at 20 mph whilst weaving in and out of other holes. So until the patching gang have been take care along the Lane. 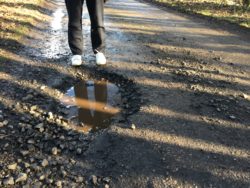 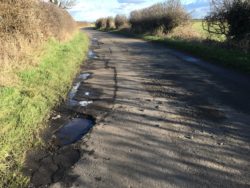 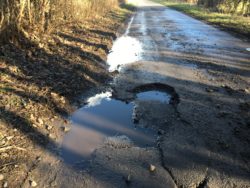 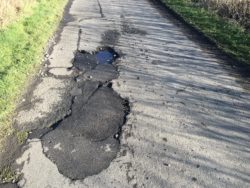 *Bit of maths here; travelling northwest on Scorcher Hills Lane to join the A1 then southbound to Five Lanes End means you have travelled along the base and vertical of a right angled triangle, whereas the hypotenuse (shortest distance) lies along Grange Lane to Five Lanes End to the A1, which currently is relatively pot hole free.