If you want to plan an event a year in advance seek out the events team that planned this year’s fete. Not many have the almost divine ability to pick the day after the heaviest thunderstorms for years and hold it in the grounds of the pub that closed down two hours after the fete finished. Makes the Red Arrows look rank amateurs in precision planning.

The morning of Sunday 20th July was a hive of activity and as always it’s amazing the speed at which the whole event comes together. OK a few trusting souls were seen testing the ground with the odd toe not believing all the water had gone. The pitches were all dry and firm ideal to stick a few tent pegs in. The de-rigeur format of Gazebos for each stand gave shade from the sun rather than anything dripping from the sky. Gazebos eh? Designed by a madman from hell these crazy tents on stilts had a number perplexed when the instructions and those essential labels on the poles were lost The crafty had colour coded the joints; where’s the fun in that?

Around 25 stands were on display:- 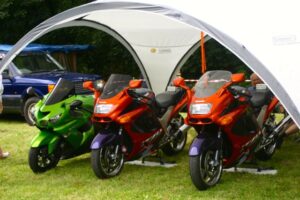 Built for speed – not the train (see below) but Steve’s Yamaha motorbikes. Kath Walters ( Parish Council Chair) was caught hanging around this stand far longer than necessary  and is now in the market for at least a leather jacket and rivets. 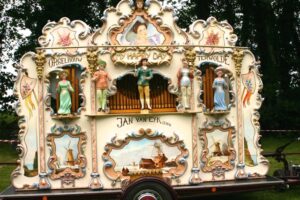 Dutch Street Organ playing popular melodies (new and old) Beautifully restored this gem arrived on its own purpose built and self powered trailer. Took all the fun at watching someone trying to reverse a trailer. Go on – you know you do. 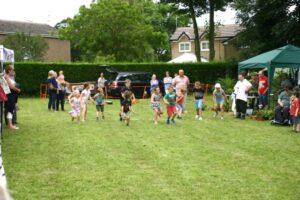 Scouts and their games 3 legged race, egg and spoon + coconut shy, splat the rat, throwing bean bags in the toilet? 0r bags in the bog!, It was a new one by the way. 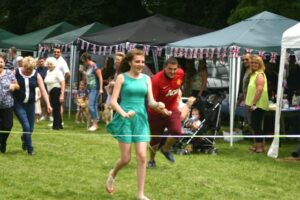 Irish dancers – who would have made mincemeat of any English Morris dancers. Maybe a dance off next year. 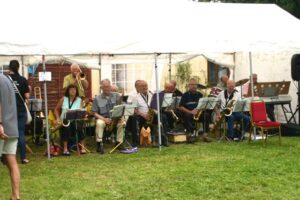 Birds of Prey that included a Kookaburra, native of Australia and able to withstand the English weird weather as it was hatched in the UK. – I asked 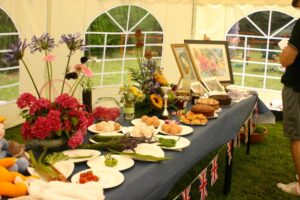 The fete events committee had its own stalls of home-made cakes, (that’s what the note said but rumour has it the stalls were more like gazebos from which they sold cakes,) and a tombola, NP Stall, Raffle 1st prize 24” flat screen colour TV with built in DVD, 2nd prize £50 High Street voucher, 3rd prize painting of the War Memorial by local artist Margaret Burns, 4th prize Elements champagne spa for two and many others. 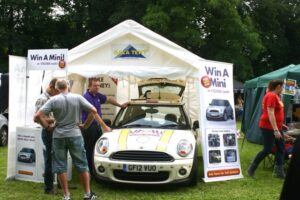 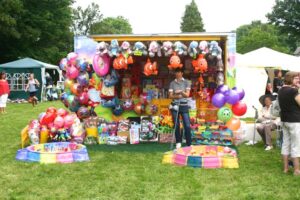 Not really  a stand unless you count something 100 metres long and 20cm wide, the model railway was a great hit with the young and Colin, the churchwarden. Colin declared “bags I’m the driver” first proving the fascination with railways doesn’t stop with vicars. The rails were made from old bed frames. Makes you wonder if Colin’s relatives all now sleep on the floor.

The fete was deemed an enjoyable success by those attending and the store holders who openly recognised the degree of planning that went in behind the scenes. The iffy weather the day before, the pub closing were a mere bagatelle to these event guys. If only there was an alternative to erecting  those unmentionble gazebos it would have been perfect.