Anyone who attended the Picnic in the Park in early August may have wondered what the fenced off area was for. It looked like it was protecting a bunch of grass in a field of grass. But deep down things were stirring. This was an area planted with wild flowers that had been specifically told to appear for the event, but did they listen! No idea how the guys at the Chelsea flower show get their stuff to behave but in Burghwallis we obviously picked a bunch of renegades with their own agenda. So here we are in the end of September and the damn things decide to now show their heads. Well next year we going to sort the beggars out big time despite the flowers looking pretty and nice and stuff like that – its all about timing, got it. 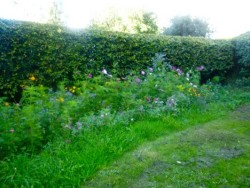